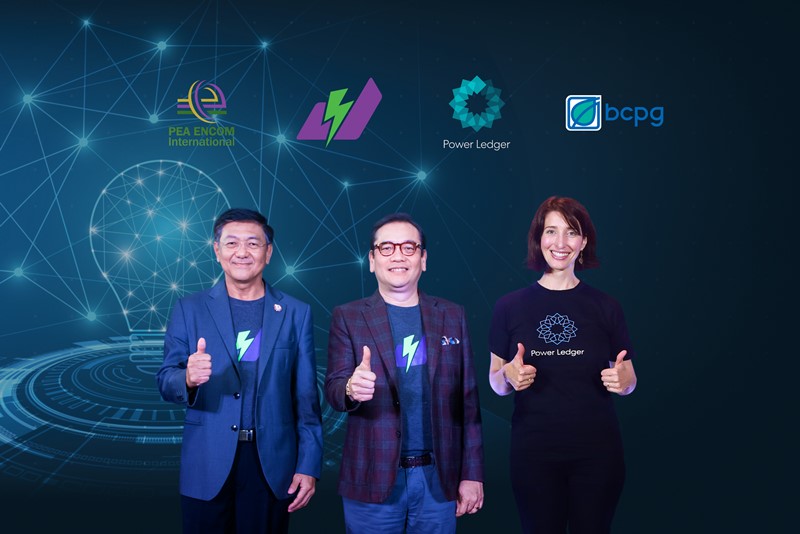 TDED, a joint venture between BCPG and PEA ENCOM International Co., Ltd., a subsidiary of Thai Government’s Provincial Electricity Authority (PEA), aims to expand clean energy business in response to the changing world by using innovation. The exclusive partnership with Power Ledger is an important step of BCPG Group to firmly enter the digital energy business in the country. The two companies, TDED and Power Ledger, will co-develop innovative products and services based on blockchain technology in P2P electricity trading and renewable energy credit trading for the Thai market.

“Power Ledger is among the very first pioneers to apply blockchain technology in peer-to-peer (P2P) energy trading and trading RECs, such expertise in state-of-the-art technology will help materialize TDED’s goal in development of digital energy products and services, as well as making clean energy more accessible to people”, said Bundit Sapianchai, President of BCPG and Chairman of the Board of TDED.

The collaboration will see the application of blockchain technology to manage energy at three BCPG Group clean power projects, which have been included in a “Sandbox Project” to accelerate renewables by Thailand’s Office of Energy Regulatory Commission.

One of the first projects will focus on energy and carbon management at the 12MW Smart Campus at Chiang Mai University in the north part of Thailand.

Power Ledger’s TraceX REC trading capabilities on its platform will be deployed in Thailand this year, which will provide a marketplace for renewable energy certificates and carbon credit trading, between generators and buyers.

TDED’s parent company – BCPG, has been working with Power Ledger since 2017 and successfully launched a P2P energy trading trial in the heart of Bangkok, Thailand across the T77 precinct in 2018. This marked the first time when renewable energy was ever exchanged in a P2P environment in Asia.

The blockchain-enabled P2P platform has brought about a phenomenal of “Prosumer” where people can be both energy producer and consumer, while selling the excess energy to their local neighborhood via the digital platform. The technology also exposes more people to an environmentally friendly energy at a lower price, creating low-cost, low-carbon society in the long run.